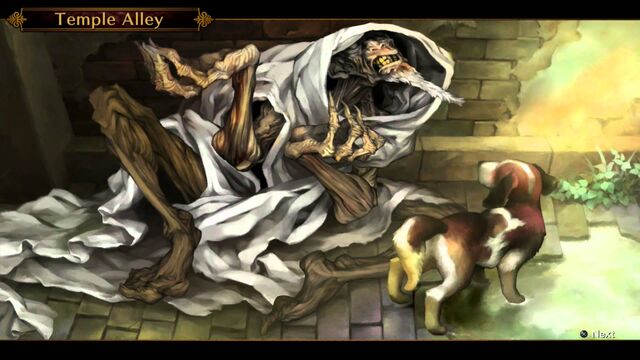 Wallace is the former king's aide, master to Rickey the Magician's Apprentice, and friend of Lucain. He was the one who created the underground labyrinth where he sealed away a swarm of cyclopes. He also had a laboratory in the Mage's Tower. Afterward, he suddenly disappeared.

After you complete the Forgotten Sanctuary for the first time, the beggar, who had been appearing when leaving Canaan Temple after completing Bilbaron Subterranean Fortress for the first time and before accessing Castle of the Dead: Catacombs for the first time, reveals himself to be Wallace. All he had been able to say up to that point was "Majinogsnaidrashin..." At Forgotten Sanctuary, you get the stone table that was placed high upon the altar in the center of the temple. This tablet is a contract between Wallace and the Demon King, whose real name is Majino-Gusna-Idra-Shin, that would grant Wallace the power to make the crown of Elicia, the Dragon's Crown, able to actually control dragons as the legends told in exchange for his soul. Wallace wanted this to be his life's work and for that reason, despite his heroics in the past, he collaborated with Morneon, and betrayed and killed his friend Lucain. But he was tricked and left as an incoherent beggar.

Wallace destroys the tablet, nullifying the contract, taking away the power to control dragons from the crown and restoring himself. Soon after that, he melts into the air, seemingly dying.

Retrieved from "https://dragons-crown.fandom.com/wiki/Wallace?oldid=7444"
Community content is available under CC-BY-SA unless otherwise noted.