Vampires are pale-skinned, buxom beauties who lurk in the Castle of the Dead. You first encounter one while going through Path A in the room where the 3rd village girl is kept.

The boss fight involves fighting multiple Vampires. They attack by clawing at you or taking to the air and firing a wave of bats. If you have a village girl (or all 3) with you, the vampires may also try to attack them by biting their necks which will rapidly deplete their health. If they are killed in this manner, they will be turned into vampires and you'll be forced to fight them as well. A Fighter with the Distraction skill is particularly helpful in this fight since he can draw the vampires' attention away from his allies, especially the village girl/s.

Their attacks are unremarkable by themselves but the fight is made challenging by the village girl/s you have to protect (you will want to have all 3 as each one gives bonus points to your end score). The key is to end the fight as fast as you can to lessen the chances of the village girls taking any damage or potentially getting turned. 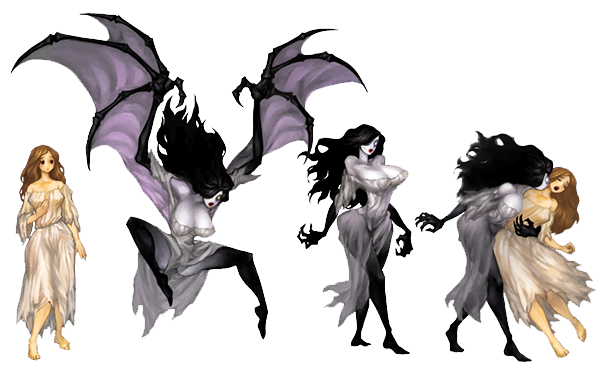 Retrieved from "https://dragons-crown.fandom.com/wiki/Vampire?oldid=8530"
Community content is available under CC-BY-SA unless otherwise noted.