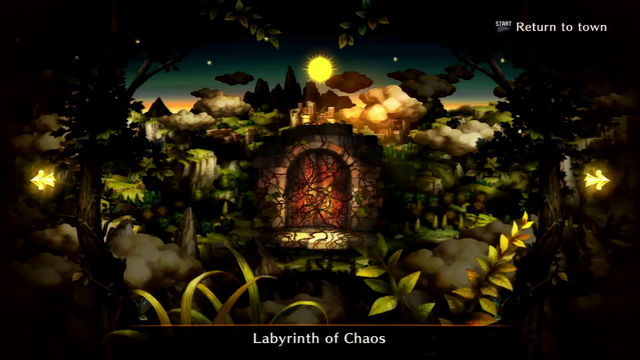 You can only get access to the next floor by beating the current floor you're at. Each floor has 3 stages to beat and you have to beat them all in one adventure. Every 9 floors has just 1 stage with Demon King as the boss fight, the stages themselves are randomly generated, which means that except the Demon King, the player can't predict which bosses nor terrains nor enemies they will face.

Each floor will give you the specified reward each time you clear it, but with different attributes in white text. You can get Amnesia Elixir which refunds most skill points on floors 3, 6, 9 just once and on floor 99 as many times as you want. You'll also get a Seal of the Conqueror once, at floor 9. After floor 9, it will have the same loots rewards from floors 1-9 repeating with them being level 99. Above floor 18, it will repeat the exact same rewards but enemies will continue to get tougher.

In Labyrinth of Chaos, the enemies' level can go up to 255 but you're stuck at 99. Enemies, especially elites, will become very strong. Some classes will have a harder time than others because of this deeper into LoC.

Camping in these 2 dungeons is decided by the host: after the host clears 3 stages, camping will occur; with the sets of ingredients are decided at random and they will change 3 times before repeating themselves. This gives the player the ability to control when camping is going to pop up, for example; a player that has the habit of doing long chains can coordinate things so that camping happens right before the Demon King and Ancient Dragon fights (giving the player boosts for those fights), In order to achieve this, the player needs to clear either of those fights and then proceed with 2 more stages before quitting.

Retrieved from "https://dragons-crown.fandom.com/wiki/Labyrinth_of_Chaos?oldid=9776"
Community content is available under CC-BY-SA unless otherwise noted.