The Harpy is a Demonic-type, half-woman, half-bird hybrid and is the first boss you face when you get to the end of the Ancient Temple Ruins on Path A.

The Harpy will perform a diving attack when she flies up before swooping down, making it easy to evade or block.

She can also perform a grab attack by flying in with feet open and reaching forward which will deal damage to the target and render him/her unable to take action until released.

The ranged attack of the Harpy involves firing feathers from her wings. This can be blocked or evaded by moving up or down but can still hit you if you at close range where you'll have less time to react.

The Harpy can also attack with whirlwinds or lightning but these can be avoided if you keep moving.

Should the Harpy take too much damage, there's a chance she'll fall to the ground for a few seconds, leaving her open to the full brunt of your party's attacks.

The harpy's eggs can be used as cooking ingredients in camp. 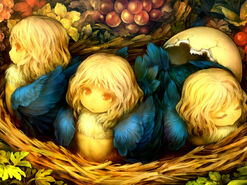 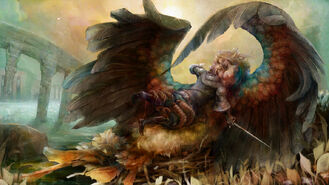 Add a photo to this gallery

Retrieved from "https://dragons-crown.fandom.com/wiki/Harpy?oldid=8523"
Community content is available under CC-BY-SA unless otherwise noted.