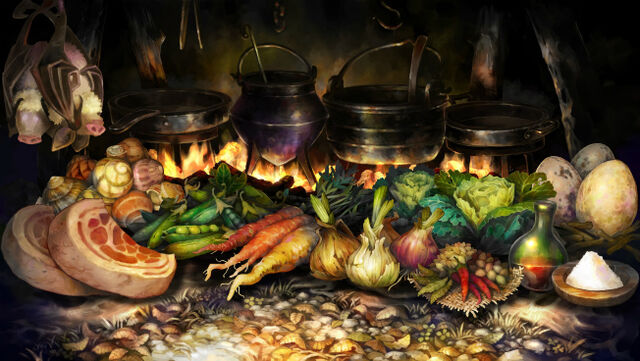 When you don't return to town after completing a level, you will sometimes camp out where you can do cooking. Cooking with the various ingredients will increase HP, attack, and defense for the next level. Depending on what class you play, each has his or her own food preference that will give better stat boosts. Cooking will also add to the total score, so cook fast!

After the tutorial levels, you go to camp after completing Ghost Ship Cove, Old Capital or Ancient Temple Ruins and continuing with your chain run.

You can either fry or boil your food. Select an ingredient with the cursor and place it in either a frying pan or a boiling pot. Once the ingredient is placed and gets slightly cooked, two options will appear as circles about the food: mix or take out. Mixing cooks the food faster, while taking out the food makes your cursor become a ladle to serve the food. Mixing the food also gives you 100 points each time.

The ingredients vary depending on which stages are played and which path is taken. In the Labyrinth of Chaos none of the special ingredients are available. Depending on the ingredients is the amount of extra HP, Attack or Defense that the player gets per dish.

To improve the quality of the dishes, you can add seasoning with three different ingredients:

By adding seasoning, the dish quality increases, adding more benefits to HP, Attack and Defense. The added effect stacks with all three seasonings, but it is not cumulative more than once. Adding any of these seasonings will give you 50 points each time you add one of them.

After Ghost Ship Cove (pattern A)

These are the ingredients used after Ghost Ship Cove. Some ingredients are obtained after defeating some of the bosses.

After Ancient Temple Ruins (pattern B)

These are the ingredients used after Ancient Temple Ruins. Some ingredients are obtained after defeating some of the bosses.

These are the ingredients used after Old Capital. Some ingredients are obtained after defeating some of the bosses. This route has the more food variations as well as the best ingredients.

After Ghost Ship Cove (pattern A)

After Ancient Temple Ruins (pattern B)

Some of the dishes, from Dragon's Crown Artworks.

Some of the dishes, from Dragon's Crown Artworks.

Community content is available under CC-BY-SA unless otherwise noted.
Advertisement