"Dauntless warriors who know no fear as they effortlessly wield their two-handed weapons. Their massive equipment delivers vicious blows that deal lethal damage to multiple foes at once. Lightly armored, they are agile fighters who rely on punishing kicks when unarmed." - Amazon description in Atlus Dragon's Crown website.

The Amazon is an all out attack character. High physical attack strength will allow players using her to mow down enemies quickly.

Deadly Revolution - The Amazon's aerial attack where she spins rapidly with her axe for fast multi-hitting attacks. Increase in level will increase power as well as add the ability to change direction up to four times.

Power Smash - A powerful technique that leaves the Amazon barehanded for about 6 seconds, performed by pressing Circle.

Brandish - A powerful axe-spin attack that hits hard and creates some knock-back, making it a great combo finisher; the Amazon is also invincible while doing this. Increase in levels will increase power and add up to doing five Brandish attacks in a row.

Punisher - This allows the Amazon to dish out her normal ground combo faster and stronger, as well as increase the chance of gaining berserk status.

Berserk - This allows the Amazon to get berserk status while attacking and increase her power and speed while in berserk mode.

Air Kick - Press X 3 times and the Amazon will perform a diagonal downward kick. She will also perform the Air Kick if you press Square while she is unarmed and airborne.

A full list of Amazon Skills can be found here .

Hip Drop - Attack that can be issued by pushing □ Button while jumping and pushing Direction Key ↓.

The Amazon has high attack power and speed which increases the more hits she lands on enemies and makes her a force to be reckoned with. When she hits, there is a chance she will enter Berserk status, which will increase her strength and mobility. Full Berserk status has her literally running circles around enemies and striking hard and fast.

However, her attack wind-up is initially slow and resets if she doesn't hit anything within a certain amount of time or if she gets hit. The Amazon also suffers from weak defense, so you need to fight smart in order to build up her strength and speed and keep them that way.

There are some things you can take advantage of when playing Amazon. Like the Fighter, the Amazon can block attacks. She also has the ability to parry right after blocking, giving her a few seconds of invincibility when attacking. Her Deadly Revolution is a great multi-hitting aerial attack in which you can change directions while mid-air. Brandish is a great combo finisher that not only hits hard with a knockback and has a wide attack range, but it also provides invincibility while doing it. Multiple-spins is possible the more the technique is leveled up.

The entire group together at a tavern

Sprites
Add a photo to this gallery 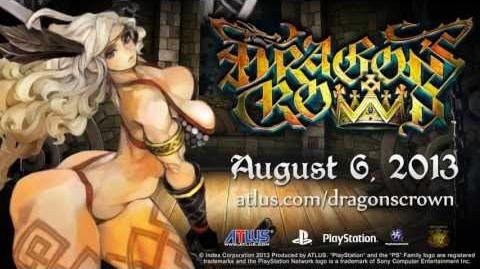 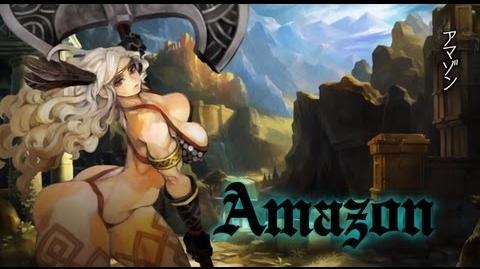 Retrieved from "https://dragons-crown.fandom.com/wiki/Amazon?oldid=9077"
Community content is available under CC-BY-SA unless otherwise noted.